Today was the 9th Day here at Bundanon, a little over half way, and I'm finding it a really important and telling time for me as a creator and performer.

Woke bright and bubbly and again I sat and contemplated what next? Some coffee and sun salutes set me in motion and I began to experiment with the idea of emotional place. To me this project, in process and performance is about physical and geographical locals or sites but can it also encapsulate the idea of emotional states. I composed a poem, not a good one, I'm definitely no poet, but to get out in language an expression of particular emotion and try to describe or colour the sense of the indescribable. From the poem I created a phrase of movement, gestural and very specific working from instinct and memorising the poem as I went along so as to speak it live with the movement.

This process of slamming text and movement together is something that I have particular interest in at the moment, and perhaps offers a way in for the audience but also provides somehow a different access point for movement creation. It took me a few hours to do this, much longer than I had anticipated, and so the plan was thrown a little today. But really the plan is there for the real process to take over is my theory.

It was warm again today, particularly in the Dot studio so headed back inside the accommodation for some lunch and film editing. I worked on compiling the Norwegian Opera House scene that I had started a couple of days ago, and considered what might accompany it. I though to use text in Norwegian about the design of the building and the architectural philosophy integrated as part of the image somehow and tried a scrolling text effect right to left, but this really didn't look good nor achieve what I wanted. I wrote to my Norwegian friend, Lisa Marie, whom I met at a site specific improve on the roof of the Opera House actually when I was there in October. I asked her if she could record some text I had found spoken in Norwegian and I will try it overlayed with the film/stills. I need to work on the rhythm of this still so it has the right build climax and resolution.

Later in the afternoon I headed back to the Dot studio and did a recap of all the scenes to date before driving to Moss Vale to meet my beautiful and incredible and insightful D-CAF!

Below are some pics from the Gonski studio where I did the poetry composition this morning, they are shots of the tables where previous artists have worked, splotched and stained with paint. Artworks I would hang though happily on my wall. But beautiful to see this layered build up of history. That question of what is art until someone say it is eh.. 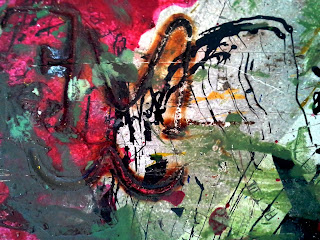 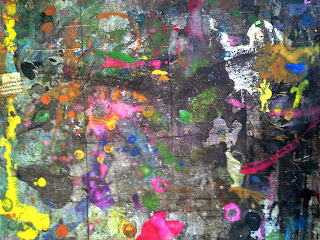 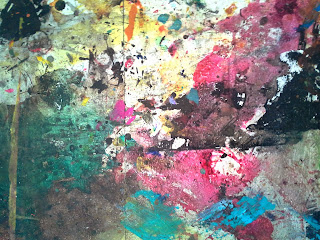 AP-arts
Alison grew up in regional NSW and completed her studies at WAAPA (BA Dance – Hons, LINK). Prior to establishing Lingua Franca dance theatre with Adam Deusien in 2012, she worked extensively in Bathurst, directing youth dance works 'No Planet B', 'Talk2Me' and 'Synthesis', 2007-2012. As a solo artist her interest lies in site specific dance, connecting and engaging with audiences via place. ln 2012 she completed a year long site specific improvisation project documented here. Alison is a 2012 recipient of the Australia Council's ArtStart grant enabling the continued development of Lingua Franca. In Canberra, Alison works as Education officer and tutor at QL2 Dance and as a freelance dance artist. Lingua Franca's new work Right Behind You has this year featured in BMEC's subscription season, the Wirksworth Festival, UK and at QL2 Dance Canberra. Alison was recently awarded Most Outstanding Choreography and Best Female Dancer for her solo work 'Lachlan' at Short + Sweet Dance Festival 2013. More about Alison, alisonplevey.com